Based on figures of GTAI (Germany Trade & Invest) we get an overview of Germany’s deep impact on Europe’s software market. It calls Germany as „the single largest software market in Europe“ with a value of EUR 21.4 billion (in 2016) and forecasts EUR 25.0 billion for 2019, also confirmed by Statista. 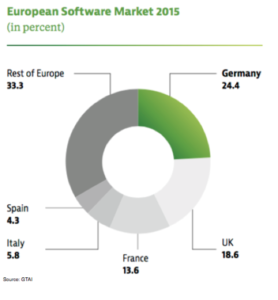 As mentioned in Eito’s researches Germany’s total ICT market reached 2016 the dimension of EUR 160,5 billion in which software makes a share in the communication sector (complete EUR 66,9 billion) of 13.5% together with IT services 23,9% and hardware 15.2%.

In 2015 this meant nearly a quarter of Europe’s software market with 24.4 percent (Germany EUR 20.2 billion), as well approved by Statista. The UK, France and Italy are following.

Sentiment in the US economy after the elections
17. November 2020

South Africa – Market Situation
10. August 2020
Go to Top
Manage Cookie Consent
To provide the best experiences, we use technologies like cookies to store and/or access device information. Consenting to these technologies will allow us to process data such as browsing behavior or unique IDs on this site. Not consenting or withdrawing consent, may adversely affect certain features and functions.
Manage options Manage services Manage vendors Read more about these purposes
View preferences
{title} {title} {title}